If using tweezers is not something that you like or your eyebrows did not grow back the way you had wanted them after threading then Microblading NYC is just the right solution for you to get natural-looking perfectly sharp eyebrows. Be that as it may, the expression “microblading” is genuinely conversational nowadays, the salon methodology can strike up a huge amount of disarray. To make the process of Microblading and the questions involved with it clear, given below is a description of the process. 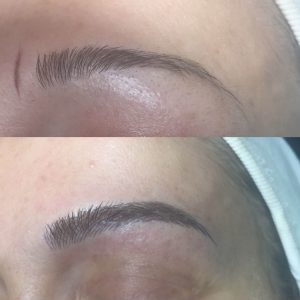 Dissimilar to using an eyebrow pencil which is easy to clear off at the end of the day, eyebrow microblading can be best described as a semi-permanent tattoo method which is done by a handheld eyebrow pen to draw strokes that impersonate the presence of genuine hair on the eyebrows. It is a comparative procedure to get a tattoo by using a spot of ink which is far less in concentration as compared to the ink which is used in making a customary tattoo.

Although, there are many numbers of products available in the market for the purpose of eyebrow maintenance people who in general decide to get the process of microblading eyebrow done prefer natural and well-groomed eyebrows on the go. This is because they don’t want to wake up filling their eyebrows every morning and stressing about the fact if they are perfect or not throughout the day. In case someone uses an eyebrow pencil frequently, then they will most likely prefer using the process of microblading as well.

The effect of microblading does not last for long yet pretty longer than any eyebrow products. Truth be told, microblading can last somewhere up till three years, contingent upon your skin type, way of life, direct exposure to the sun, and the skincare items that the patients use. Be that as it may, regular touch-ups are usually required about once per year, particularly for those people who have oily skin because their skin is prone to the fading of pigment more than others.

For the process, the region is disinfected and desensitized, with the eyebrow-shaped being drawn. Although the choices may vary, the best way is to choose genuine-looking eyebrows. The specialist will carry the process by following the natural eyebrow hair while taking into account the customer’s face symmetry and age. The customers are counseled on the shade of the ink, which is picked dependent on the natural shade of the eyebrow hair and the skin tone. At that point, the process is moved onto drawing the strokes utilizing the microblading pen, which can take somewhere in the range of about half an hour, contingent upon the eyebrow region. Upon completion of the eyebrows, and aftercare topical ointment is given to heal. A subsequent meeting is then booked for about a month and a half later.

In order to take the best advantages of microblading, a good and experienced professional must be chosen so that the eyebrows look extremely attractive.